“We don’t have any billionaires getting off the plane at YVR and heading straight out to Bear Creek Park in Surrey to buy a house,” says veteran realtor Sukhi Kang.

Surrey has not been a mecca for wealthy offshore or domestic housing investors, say Kang and other realtors, who maintain the relative lack of speculators has been beneficial for the fast-growing city south of the Fraser River.

The preponderance of native-born and new-immigrant buyers who are simply searching for a home to live in is why housing values have remained unusually stable in Surrey compared to the high-end neighbourhoods of Metro Vancouver, where housing bubbles began popping in 2017.

According to an interactive Postmedia chart of more than 160 Metro Vancouver neighbourhoods, BC Assessment values for multi-million-dollar homes in posh neighbourhoods of West Van and the west side of Vancouver dropped by roughly one-fifth in just one year. So did neighbourhoods in Richmond.

In contrast, Surrey housing prices remained quite stable in most neighbourhoods, particularly in the large northern section where detached homes often sell for less than $1 million.

While luxury West Van houses in hillside neighbourhoods such as Chartwell, the British Properties and Upper Caulfield were pounded when prices plummeted between 18 and 25% this year, north Surrey neighbourhoods like Newton, Cloverdale, Guildford, Clayton Heights, Whalley and Fleetwood experienced only minor dips of one to five per cent.

Some other Metro Vancouver neighbourhoods that escaped investor mania and remained fairly firm in value were the District of Langley’s Brookswood and Fort Langley, North Delta’s Kennedy West (next to North Surrey), New Westminster’s Queensborough and Brow of the Hill and North Vancouver’s Lynn Valley and Seymour Heights.

Sprawling north Surrey stood out for its across-the-board stability. “The affordability factor is big here,” says Bobby Bisla, one of more than 300 realtors working out of Century 21 Coastal Realty’s super-busy office in Newton.

“We don’t want a market that’s going berserk with multiple offers. It’s better for everyone, buyers and sellers, to have a stable market, a balanced market, for people who work here.”

Surrey, which has a population of more than half a million, is one of the fastest-growing municipalities in Canada, expanding by two per cent a year through a combination of intercity mobility and international immigration, mostly from South Asia.

“The foreign-buyers tax didn’t do a thing to slow down buying in Surrey,” when it was instituted in 2016, said Kang.

His market analysis contrasts with that of realtors in West Van, who say the foreign-buyers tax, as well as the BC government’s speculation and vacancy tax, led to transnational investors, especially from China and Iran, drying up. West Van councillor Craig Cameron is among those who generally welcomes his municipality’s price correction.

“The Surrey market is different from West Vancouver. It’s basically made up of local people. People still need to buy houses to live in Surrey. But no one really needs to buy a $20-million house in West Vancouver,” said Kang, who is also with Century 21 Coastal Realty.

The veteran Surrey realtor said his region’s housing market remains solid because it’s affordable and because it’s attractive to immigrants from South Asia who choose to move into an ethno-religious culture that feels familiar. 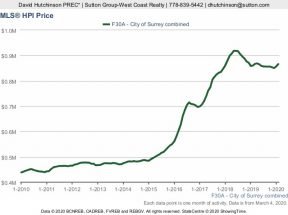 Census Canada figures show that 40% to 60% of the residents of the neighbourhoods of North Surrey where housing values remained quite stable — such as in Newton, Fleetwood and Kennedy — have roots in India.

“The cultural thing is significant,” said Kang. “Many new immigrants from India and Pakistan want to come to a place where they can feel comfortable, where they might be able to stay close to their families, where there are many gurdwaras, mosques and temples.”

And most people who want to buy in Surrey don’t have huge amounts of money, said Kang, whether they are people of colour or Caucasian. “You can still get a townhouse for $500,000.”

It’s typical for buyers in Surrey to show up with only small down payments, Kang said, which has made them vulnerable to the federal government’s financial “stress-test” for qualifying for a mortgage.