How Much Homebuyers are Willing to Pay for Property in Prime Areas?

It’s no secret that location can have a huge influence on how a home is priced, and a new report from Century 21 Canada shows just how much homebuyers are willing to pay for property in prime areas.

The report is based on a survey of the real estate franchisor’s local offices scattered across the country, and Century 21 acknowledges that the process — they’ve ranked markets based on typical price per square foot — isn’t exactly scientific.

“[E]very office and province tracks statistics slightly differently. As a result, some have used either the average or benchmark prices (depending on the market),” Century 21 explains, adding franchises agree the numbers do accurately reflect market conditions.

For most markets, detached homes were chosen as the default housing type, but in some urban centres condos were the norm.

Unsurprisingly, Vancouver and Toronto areas dominate the list, with condos in the cities’ downtown cores ranked first and second, respectively.

The average downtown Vancouver condo sold in the first half of the year went for $1,241 per square foot, compared to Toronto, where typical downtown condos cost $994 per square foot.

Beyond Canada’s two most expensive cities, a third contender has emerged: Montreal.

An area within Quebec’s biggest city claimed two spots in the top 10, one for condos and the other for detached homes.

Condos in Downtown and Southwest achieved selling prices of $709 per square foot, while a square foot of an average detached home there went for $674.

“Your real estate story is very different, depending on where in Canada you live,” notes Brian Rushton, Century 21 Canada’s executive vice president, in a statement.

Check out the rest of the markets below, as well as a roundup of the least expensive cities in the country. 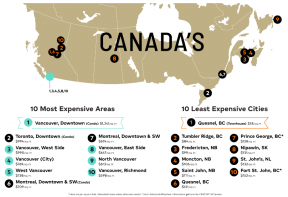